What are the best practices around DataStore being down?

DataStoreService going down is arguably one of the most harmful problems that could happen. Especially when players are spending money this can heavily threaten the player experience and trust. So I would like to know what a developer can do to minimize disaster when this service happens to go down.

Overall, DataStoreService going down temporarily seems like a problem that is tricky to work around no matter how you turn or twist it. So I would like to know, what are some effective solutions, or at least band-aids you could try to minimize the effects of this service going down?

For such an important feature, DataStores are lacking a lot.

Unless you go out of your way to either make your own system via external server(s) or using a 3rd party service. Solving data loss is (near?) impossible.

Personally I think that so long as you do your best to ensure the loss is NOT because of an over-sight on your part, you will be ok. However… that doesn’t mean you can just leave it be.

Here is a prompt I show in my upcoming game for when such issues arise. 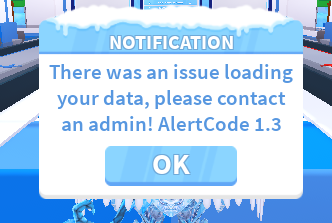 To take it a step further, once my game is made aware that such issues are happening, I lock up any purchases that can be made for Robux which would require saving. To best prevent any players unintentionally getting scammed out of their money.

Really by ensuring that you are up-front with your community and make sure they are aware of any situation that may affect them, you would be doing you and your game a huge favor.

To take it a step further, once my game is made aware that such issues are happening, I lock up any purchases that can be made for Robux which would require saving. To best prevent any players unintentionally getting scammed out of their money.

Do you also have any mechanism to automatically unlock purchases at a later moment? And if so, what approach are you taking?

Nothing too fancy though, Since the game uses a custom made datastore handler I have it doing 30 second / 1 minute checks once datastores do go down as all other requests to datastores get paused.

Obviously can’t pause game-play for the player so anything that does need to be saved is put into a cache and once services return I have it push everything to datastores.

It would be really nice to have the write cool down removed as it would help systems like this catch up on backlogs faster.

Again, this is not 100% solution as the server could potentially shut down before it has time to clear the backlog, however at that point you really can’t do anything about it…

My situation is uncommon and doesn’t apply to most DataStore usage, but it’s food for thought regardless.

Most games can continue to be played while data is missing/unsavable, but Lua Learning’s tutorial section can’t. Lua Learning has 200+ tutorials for users to read. It’s “global” data in the sense that it isn’t tied to any player, but can be altered by multiple live servers (any servers that have a moderator logged in and authed.)

If DataStores are down, a massive portion of the game would just say “Failed to load, retry later” and I don’t find that acceptable.

I wrote a plugin (just a script, no UI) that (when I open Lua Learning in Studio) will fetch the data, write it into module scripts1 , put it into a Backups folder in ServerStorage, and then prompt me to save that to my PC for backup in case something ever goes wrong.

If DataStores are failing, the server will fetch the data from these ModuleScripts instead. The tutorial data could be old2, but that’s generally good enough. Viewing live stats, reviews, upvoting, etc will still be down- but you can always read tutorials regardless of DataStore status.3

1 ModuleScripts is plural because plugins cannot write enough characters to Script.Source, so I have a top layer module that requires, combines, and returns all children modules and each child module returns a dictionary of tutorial data. Annoying, but the result is the same.

2 After I approve new/changed tutorials, I generally remember to go recreate these backups so it’s almost always up-to-date. However, that’s not always the case and the point I was making is that the data is a snapshot that can work regardless of time or correctness.

Two ideas I had just off the top of my head that might help with detecting datastore issues (in the case the methods don’t error, which has happened a couple times):

I haven’t considered how caching and other details might affect these checks, but in theory I think they should work.