Figuring out an algorithm to place models on irregular surfaces

tl;dr: Skip to My consideration and My questions.

I want to write a function that lets me place models on surfaces. The model is placed at a given location with an orientation that aligns with both the orientation of the surface, and the direction that the player (who is placing the model) is facing.

However, a location for a model may be rejected if:

So the following 3 examples should all be rejected:

The space in which models may be placed contains many surfaces with irregular elevations and orientations. Below is an example of what an irregular surface may look like:

The elevation between the left and right half of this surface differs not too much, but there is a small but very very steep slope right in the middle of it. If I were to place a model that aligns with the surface’s normal right in the middle of that surface, it will be rejected as per condition 1. (Part of the model clips into the ground or a wall) 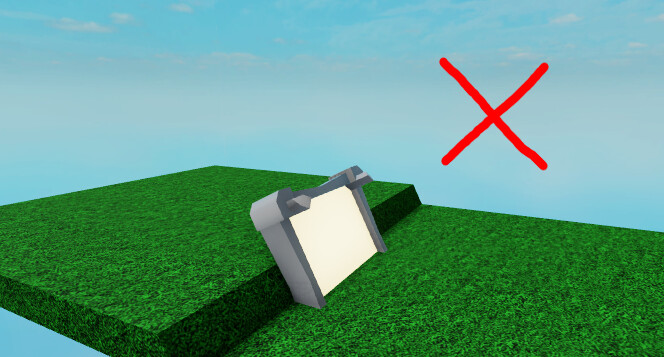 However, a smarter algorithm might detect that the area surrounding the model is on average flat enough to place the model in such a way that it passes all 3 conditions: 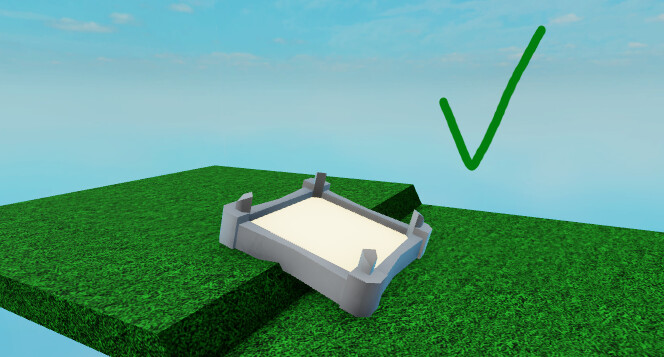 In this example, the model does not clip into the ground or a wall. It does not reach over a cliff, and it also does not rest on a steep slope. This is the kind of algorithm I would like to write. 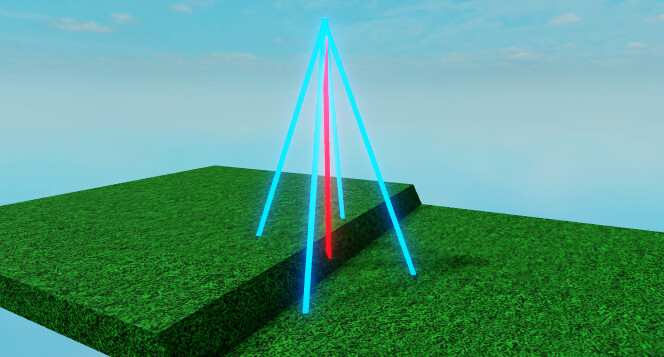 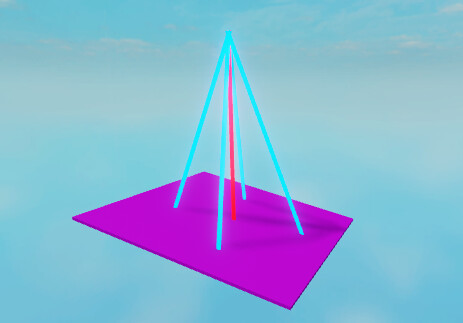 Unfortunately this algorithm does have its flaws. For example, if one of the rays in step 1 returns a location that is only slightly higher up than the others, there is no good way of knowing if this means that the ray hit a wall, or if the surface is slanted. You could check the direction of the returned normal as well, but then you run into the problem where models may not be placed on e.g. stairs, because the algorithm treats the side of a step as a wall.

That all being said, I have a couple of questions:

a. Is this a smart way of tackling the problem, or is there a better approach that I am missing?

b. If this approach is fine, how would I execute the second and third step of my algorithm? (Constructing a plane using the 5 given locations, and aligning the model on this surface, facing the same direction of a player)

Personally, I would check there is enough space as the final step. As a first step, I would determine the plane that the model should be placed on.

Before going into more detail though, it would help to have some more examples of cases that would be accepted and rejected. I’m especially interested in cases where there might be a small part which would intersect with the model.

As requested, I’ve made some extra pictures illustrating some edge cases and the desired results. Note that for some cases multiple outputs would be fine, though I do have my preferences of course.

This is a situation where the location at which a model is placed is higher up than the locations to the left, right, front and back, but the slopes in all 4 directions are not steep enough for rejection.

Desired output: The model is placed upright at the highest point. 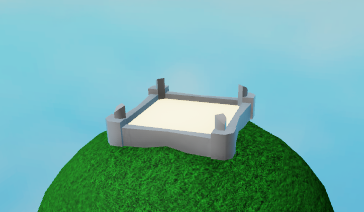 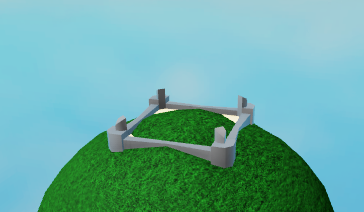 This is a situation where looking from above, all surfaces are horizontal, but looking from the side there are many ‘low’ walls.

Desired output: The model is aligned with the stairs as if the stairs were covered with giant cardboard sheets, provided that its angle does not exceed a threshold (condition 3 from the original post) 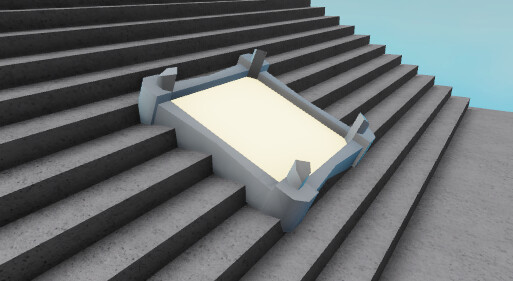 Incorrect output: The model is aligned with an individual step, on one side it clips into other steps, and on the other side it hovers over other steps. This violates condition 1. 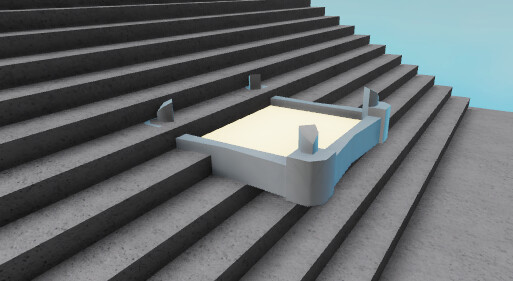 This is a situation where the model is placed nearby props that are thin and tall.

Alternative, though undesired output: The model may clip through the prop as long as the prop is not obstructing too much of the model (you can still see more than ~75% of the model) 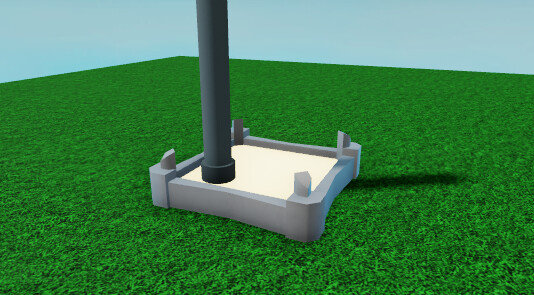 Incorrect output: When there are many props clipping through the model, the model’s location should be rejected. 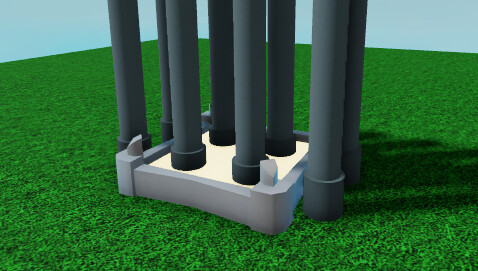 This is a situation where a model is placed near props that are very low to the ground. The prop shown in the examples would be the tallest prop I would still consider a ‘low prop’.

Desired output: The model should be placed such that it looks as if it were ‘dropped’ onto the props, provided that its angle does not exceed a threshold (condition 3 from the original post) 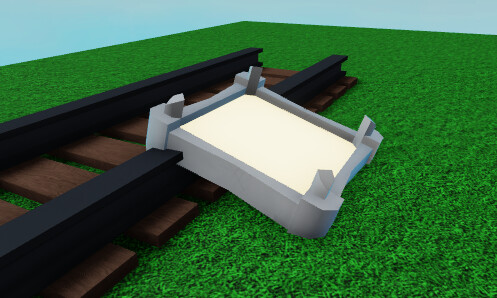 Alternative output: The model may clip slightly into the low prop. 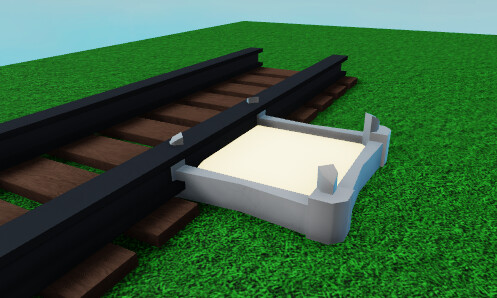 This is a situation where a model is placed near a tall vertical surface.

Desired output: If the model intersects the wall, its location should be rejected.

Alternative, though undesired output: The model is slightly slanted diagonally against the wall. 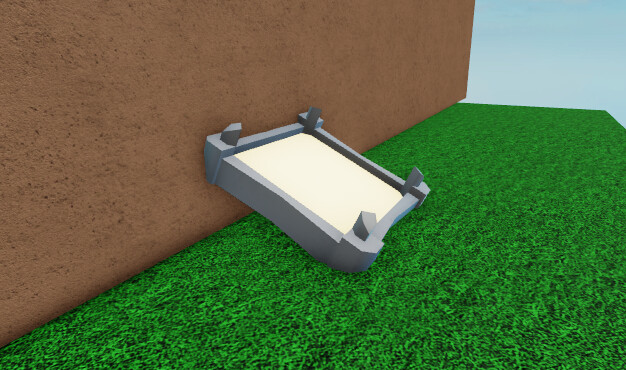 Incorrect output: The model intersects with the wall. 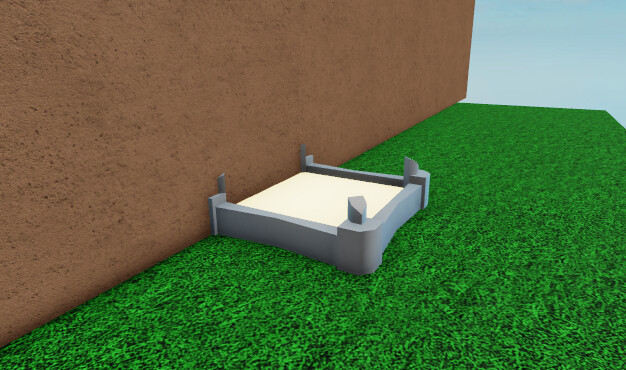 I understand that it would be (near) impossible to write an algorithm that correctly deals with all these edge cases, but this should at least provide some more insight, and any approach that comes even close to dealing with these edge cases would be amazing.

I can’t come up with a simple algorithm to solve all these edge cases, and I don’t think there really is something simple and neat that can be explained in a few sentences.

Instead, I’ll share some kind of method I use when I encounter problems like that. Here, the complexity comes from the multiple edge cases you presented. Each of them alone are not really “hard”, there is just a lot of stuff to think of when you are trying to solve the whole thing at once.

I haven’t invented this, it’s just a way to apply tests driven development (commonly known as TDD) in practice. This won’t be some hardcore TDD with tiny unit tests and too much mocks: I’ll talk more about integration level tests because unit tests are more bound to the implementation. Since we don’t know what the implementation will be, we need to write tests on the general solution.

First step, you need to come up with a way to run automated tests on your solution. Good thing: there is an open source test framework by Roblox called TestEZ (pronounced test-easy). If you didn’t know about it, you should get familiar with it because it is really helpful whenever you want to make sure something actually works (which I guess is always?).

You can setup TestEZ to run when you press “Play” in Studio or with something like run-in-roblox. Pick something that goes with your workflow, does not really matter as long as it’s really easy and doesn’t take much time.

Since your problem placing instances on other instances, I suggest to create different groups of instances to test the solution. Take the different parts from the situations you described and bundle them together. Each bundle should include the place where you expect the object to be placed and the input (which would be where the player is). These will be useful for building up your test cases.

Now that you have the workflow setup, it’s time to actually code the solution.

Now that we’ve described how to incrementally add complexity by adding new test cases, I wanted to circle back on unit tests and when they are useful.

As the general solution increase in complexity, you’ll create new functions or classes within the general solution to solve a smaller part of the problem (i.e. getting a plane data from some points, finding if props are within a certain region, etc). All these tinier problem-solvers are the building blocks of the global solution: you need to make sure they’re reliable. That’s where you should write unit tests to have that guarantee.

That means that within step #2 from above, you can create an inner loop with step 1 to 3, but on a smaller level, for a specific function you’d use within the general solution.

For some new comers, developing tests along with code sometimes seems like an additional (or even unnecessary) task. Some kind of tests are harder to write than others, but when it comes to a specific algorithm like you describe, they’re generally really easy. You just need to pass some input to a function, and then asserts that the result is what you expect from it.

There is a bunch of benefits that comes with this development practice. One is that, you often end up naturally with at least “ok” or even “good” quality code when doing testing, because you’ll tend to split up behavior into functions or classes, so that they are easier to tests. If your tests are neat and simple, it probably means that the implementation is not bad.

If it’s the first time you ever write tests, don’t feel discouraged if you find it hard or if you feel like you always need to go change them. After all, writing good tests is a skill like anything else, it takes practice to get really good at it. So making simple tests that persist through time and variation of the implementation is not something you achieve in one day.

I hope this helps you out getting though the door and start coding a solution for your problem! If you (or anyone interested) has any question, feel free to reply or ping me on discord. I’m always happy to help out