This thread is the place to find and share common algorithms that you use on frequently while developing on Roblox.

In the interests of keeping this thread clean, please keep the following in mind before submitting a reply:

If you have a question about an existing algorithm, please create a new post and link back to this thread.

If you believe your implementation is superior, please give details about what sets it apart from the existing post when submitting your revision.

Most importantly – Thanks for contributing!

An explanation about what the algorithm does and how it can be used.

Additional details that might be relevant to the user

To calculate the angle between two vectors without a normalization step:

The more common acos(a:Dot(b)) method should be avoided due to imprecision issues close to the poles, and because it relies on how well the vectors are normalized.

Test if a point is in a box

To test if a 3D point pt is inside a bounding box defined by a CFrame cf and size sz:

Wait for the first of N signals to fire

Given a tuple of Lua signals, to wait only for the first of them to fire without leaking memory:

Get Angle from Three Side Lengths of a Triangle

The underlying math used here is often referred to as the “Law of Cosines”. Googling that exact phrase will also get you a handy visualization / calculator. 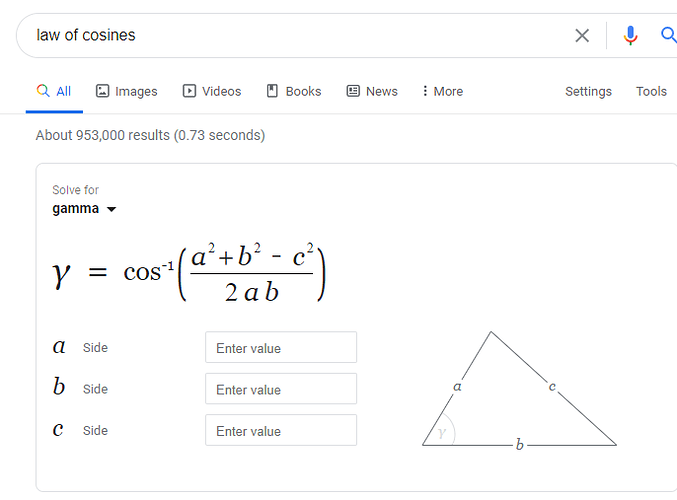 All I’ve done is taken the math above and translated it into lua.

I’ve used this algorithm a ton in working with inverse-kinematics among other things. Enjoy!

Euler numbers are common in 3D manipulation code. On Roblox, they’re formatted to automatically round to be within -180 and 180 degrees. This can make combining Euler numbers on the same axis difficult.

To overcome this difficulty I’ve developed 3 basic algorithms to allow me to treat Euler numbers like regular numbers. They all use radians, however, I’ll be discussing them using degrees because I feel they’re more accessible to think about as many of us were taught about angles using degrees first.

Manipulating a stored Euler number directly can lead to numbers being outside -180 to 180. Usually, Roblox will automatically round that number to be within acceptable ranges when it’s applied to one of their custom data types. However, if you’ve temporarily stored an Euler Number as a regular number it will not do this. If your programming assumes the number to be between 180 and -180 (like the other methods in this post) you’ll need a way to round numbers to be within 180 and -180.

This properly handles instances where a large positive Euler number needs to find the quickest route to a large negative one. For example, going from 150 to -170 in traditional math will lead to the conclusion that you need to rotate -320 degrees to reach that point. However with Euler 180 = -180, thus the shortest path is actually to rotate 40 degrees.

In my opinion, the most useful method on this list as well as the product of the two previous methods is Euler Lerp. This method will return a number between two radians in proportion to the alpha (a number from 0 to 1).

I can’t vouch for these being the most optimized ways to accomplish these tasks, but they work. If anyone has a faster route I’ll be more than happy to update the code in both this post as well as my own games. Enjoy!

Given a 2D position on a SurfaceGui, convert it to 3D world space.

Just to clarify beforehand, those are 3d equations.

Find the distance between a point and a line.

Given any point, return the coordinates of the closest point on the line.

This is an adapted version of Sleitnick/Crazyman32’s scaling function found here.